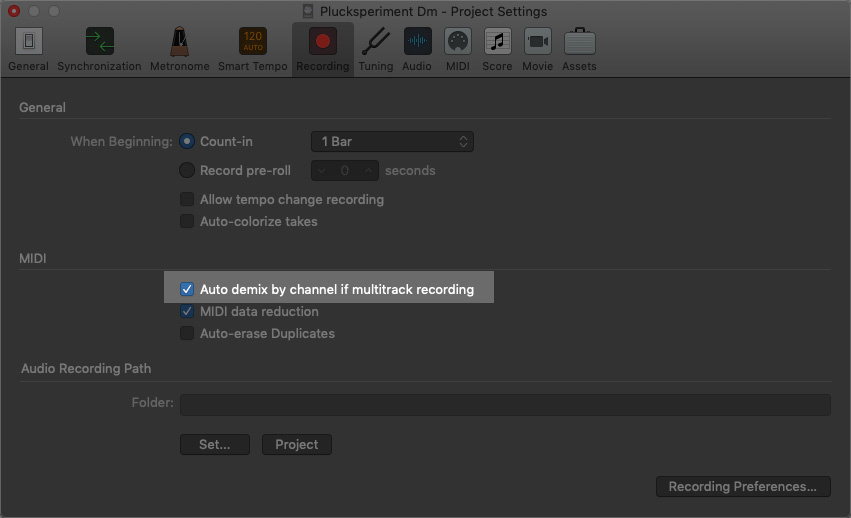 To record multiple MIDI instruments to different tracks in Logic simultaneously, tick the ‘Auto demix by channel if multitrack recording’ option, and set each MIDI input source to different channels.

I really need some tips on setting up my synth collection. i have a korg kronos, a yamaha motif, a roland jupiter 80 and a roland jd-xa. I also have an audio mixer and three different types of monitors. I’m going to get a multichannel midi interface and some midi cables, and I want to hook everything up so all the synths will work through midi in logic. I already have everything going through the mixer so I can record audio, but I want everything to work through midi (not just the kronos, as it is at the moment).

See also: How To Turn On Beats Studio Buds Without Case

sos contributor martin walker replies: This situation confronts us all when we start collecting keyboards and synths, and the initial setup will evolve over the years as we acquire more midi gear or change what to have you can now record the audio output of each of your synths through your mixer, and then route the mixer’s output back to logic through a spare pair of inputs on your audio interface. but the beauty of recording midi of every synth is that it captures the note and expression data of your performances, so you can edit this after recording to correct any wrong notes or adjust dodgy timing using Logic’s quantize functions , and you can overdub additional notes, or record more passes of performance controls like pitch bend, modwheel, or aftertouch, too.

The simplest approach is to connect each synth’s midi output to a different midi input on your multichannel midi interface, and then connect the interface’s corresponding midi output to each synth’s midi input. this will allow you to record midi data from one or more of your synths into your daw when you play your keyboards, and then when you select play in logic, any and all midi tracks recorded in your song will play through your daws. real-time synthesizers. weather. to avoid confusion, it’s best to disable any currently unused midi inputs and outputs in your daw (this just makes your list shorter) and rename each of the used interface inputs and outputs, with a short name, easy to read and appropriate for everyone. synth (for example, its logical midi inputs and outputs could be labeled kronos, motif, jup80, and jdxa).

then locate and disable local midi control within each of your synths. In the default local midi condition, when you play a note, this midi data is sent directly to the synthesizer so you can hear the result immediately. but when the midi data is sent to your daw and then fed back to the synth to play the note, it will trigger two notes instead. By disabling local midi control, only notes and other data played through your daw will be heard, preventing “ghost” notes and avoiding midi loops. everything should now be in place to record and play your synths through your daw. An advantage of using an audio mixer is that you don’t need to turn on your computer to make music, but keep in mind that if you want to play your synths without your computer being turned on, you’ll need to re-enable local midi control.

Things get a bit more complicated on the midi side if you intend to use software synths or add hardware synth modules that lack keyboards. in these situations you must decide which of your keyboards you want to use to ‘play’ the other devices. the chosen keyboard’s midi output should be routed within logic to the appropriate project track’s midi input, and then the track’s output routed to either the software synth or the midi output you’ve connected the synth plug-in to. the keyboard you choose should be dictated by the sounds you’re playing; for example, if I’m playing a grand piano sound, I’d always route my 88-note keyboard controller to it, whereas a monophonic synth will probably play just fine across a keyboard with a two- or three-octave interval and a sound. polyphonic synthesizer with a four or five octave keyboard.

sos reviews editor matt houghton adds: martin has given some good general advice on how to connect it all up, and for most dummies that’s pretty much all you need to know. but if you need to record the midi outputs of multiple synths to different midi tracks/instruments in logic simultaneously, you will need to adjust some settings in logic pro, as the default is to receive all midi inputs on the record-ready/monitored tracks.

To route individual midi devices to different tracks in logic, go to the advanced preferences panel and select show advanced tools. choose project/record settings/’auto demix per channel if multitrack recording’. you can then enable recording in the track header of each track you want to record to (the buttons will flash red to indicate which tracks are armed for recording), and in the track inspector for each track choose a midi channel single via the midi channel pop-up menu and set the desired hardware synth to transmit on that channel. that should allow you to record all your synths’ midi outputs onto dedicated tracks in logic, or have each trigger a different virtual instrument. Please note that until you finish recording, you will only see the midi recording on the currently selected track; when finished, the midi data of the other tracks being recorded will be visible.

See Also:  How do you pair Altice boxes?

How to Connect Spotify to Tinder to Display Your Music Taste How to Transfer Any eBook to Kindle Using Calibre

How To Connect An External Microphone To An IPhone: A Complete Guide – Home Studio Expert