How to connect mic to interface

If you’re new to music production, and more specifically home studios and recording, all the necessary equipment and learning how to use it can seem especially daunting.

An audio interface, in case you don’t already know, is a piece of equipment that converts analog information (in this case, the signal from the microphone) into digital information that your computer can understand. If you don’t already own an audio interface, get the Focusrite Scarlett 2i2 (from Amazon). I have more of a detailed walkthrough on how to set this up in the subsections below.

By the way, I’m always looking for deals in the music industry (there’s usually something if you know where to look). at this moment, there are 3 offers that catch my attention

equipment you need to connect a dynamic microphone to your computer

Connecting a microphone to your computer is not difficult at all, but if you are not familiar with the equipment involved or if you are new to home studios, then it can seem a bit intimidating. I’ve included a list below of all the gear you’ll need to get this up and running. It won’t cost you a lot of money. 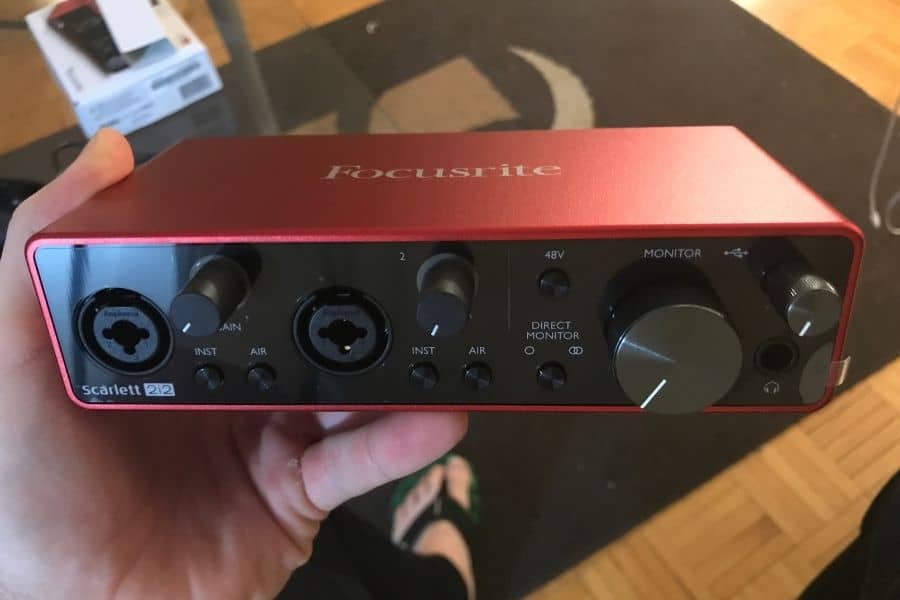 There are other audio interfaces on the market like Universal Audio’s Apollo Twin from ZZounds, but I find the Scarlett 2i2 is a great introduction. I have the latest model (which includes the “Air” button and the Direct Monitoring button) and I love it. Focusrite knows how to make a sturdy, beautiful, piece of equipment, and I couldn’t recommend it enough. However, there is one thing I don’t like about it which I talked about in my article.

If you’d like to learn more about audio interfaces before you go out and buy one, read more in my ultimate guide to garageband audio interfaces, which explains what it actually does, including some of the terminology surrounding it. 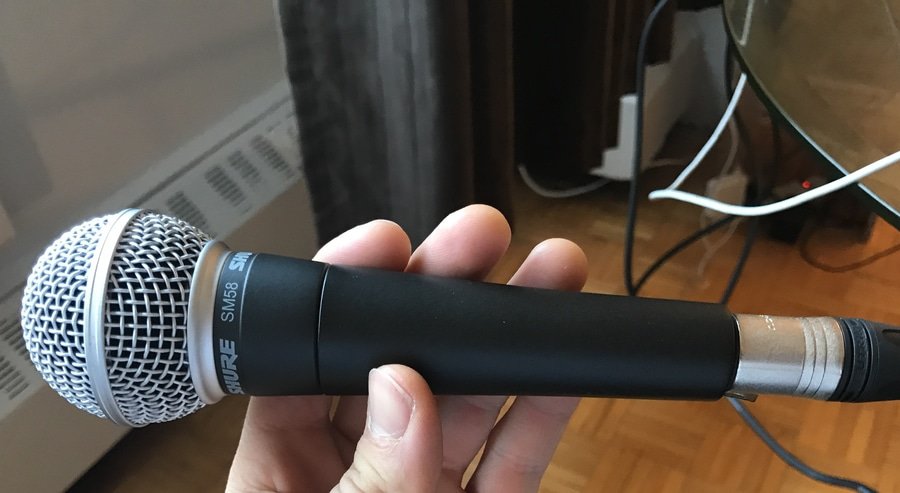 I assume that if you’re reading this article, you already own a dynamic microphone, but if you don’t, I would recommend getting the classic Shure SM58 (which you can find on Amazon for a good price). This is a great all-around microphone that’s going to work just fine for recording whatever you need.

In addition, the Shure SM58 is amazing for live performance due to its reliability and ruggedness. Getting a quality microphone is important, but ultimately your singing skills are what matters most, and that’s one of the reasons I recommend getting singorama (from their site). a $100 xlr cable or a $1000 mic won’t make a difference but a novice and pro vocal performance but I digress. the next thing you need is a cable.

Many microphones will come with an XLR cable, although, some of them don’t, including the Shure SM58 – (if you chose to get that one). The XLR cable is what’s used to connect the vast majority of microphones out there to an audio interface, a PA, or whatever piece of equipment you’re connecting it to. It’s one of those items where you really couldn’t own enough of them.

get a cable d’addario from amazon; They are one of the most reputable companies creating cables, cords and more. while they tend to be a bit more expensive, I think they are sturdier and last much longer as well. You may think you’re winning by cheapening cables, but I guarantee you’ll end up paying for it anyway, so you might as well pay for it upfront by getting a solid cable. 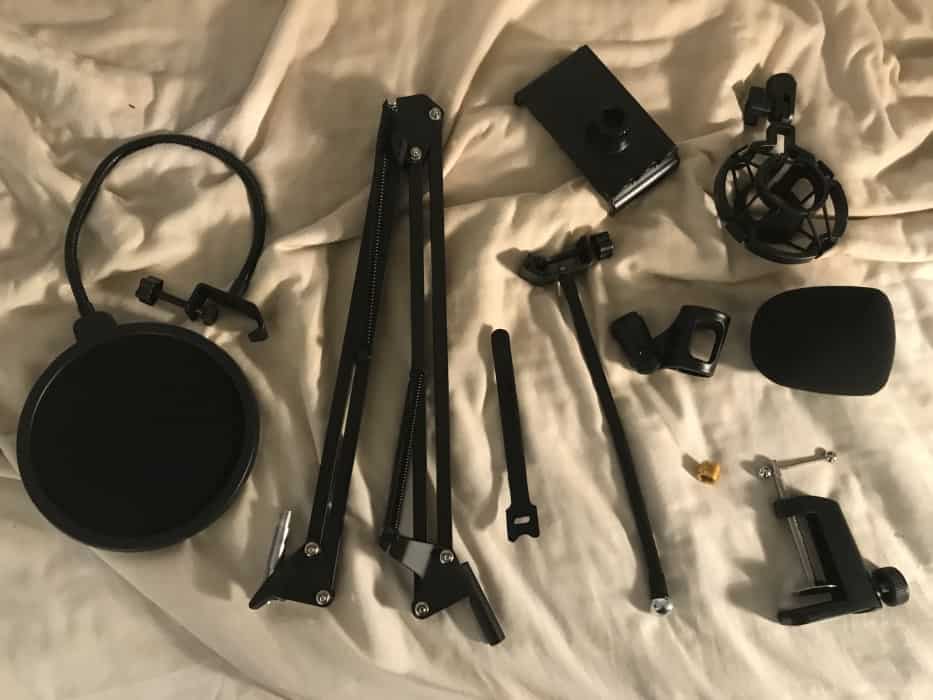 Frankly, I hesitated to add the term “optional” on top of this, simply because a boom arm, a pop filter, a wind guard, a shock mount, and a wind guard are items you’re going to end up buying down the line anyway. While you don’t technically “need” these items, at some point, you’re going to find yourself purchasing them because they’re going to make your life a lot easier.

After all, how are you going to sing and play guitar if you don’t have a mic stand? or how are you going to make youtube videos if you have to hold a microphone all the time? what about annoying plosive sounds like “ps” and “ss”? The accessories I have listed above are a must have for anyone who is serious about recording.

so go ahead and grab the collection i recently got from amazon. It comes with an articulated arm, a windscreen, a pop filter, a shock absorber and a phone holder. if you also want a mic stand, get this one from amazon. that’s it for the equipment you need to get started with a dynamic microphone and your computer.

5) use a daw to record your voice

Assuming you got here from google, understand that this website is mostly focused on garageband tutorials at the moment, so it’s worth mentioning that if you need anything, garageband is a great place to start. this is the digital audio workstation that will actually record your voice.

If you’re using windows instead of macOS, you can grab something like the professional fox plugin tools, assuming you’re doing this because you’re into music production. If that’s not the case, then you’d probably be better off just plugging a usb microphone into your computer, like the samson q2u.

1) connect the audio interface to your computer

If you’re using a newer version of a macbook pro or some other newer computer, you’ll probably need an adapter like the usb to usb-c connector. if you had an older macbook pro with a usb port this would not be the case but most newer models only have thunderbolt ports. Either way, if you’re connecting an audio interface to a newer computer, like a 2017 MacBook Pro, for example, you’ll need a USB to USB-C adapter (also on Amazon). 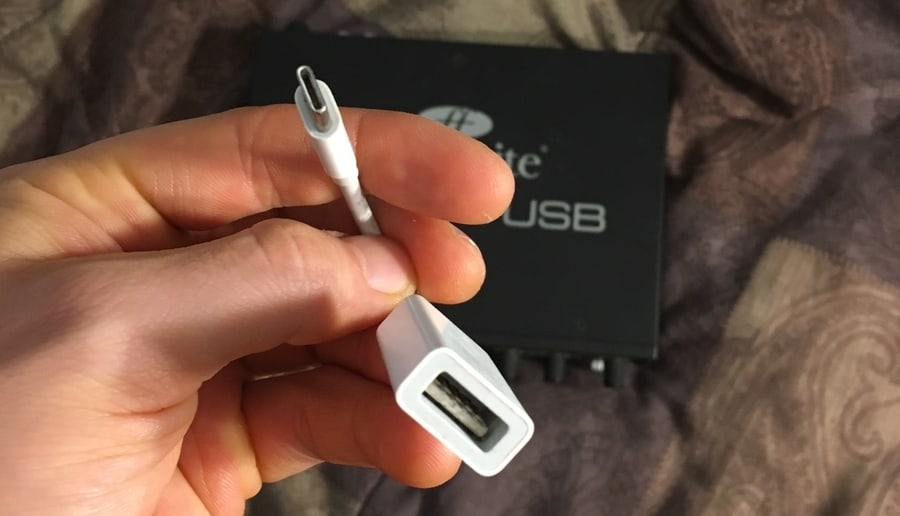 Connect the USB to USB-C adaptor to your computer, and then run the Thunderbolt to USB cable from the computer to the back of your audio interface. If you’re using a Focusrite Scarlett 2i2 like what I recommended, you’ll notice it’ll start to turn on, shown by the lights on various buttons and knobs.

connect the xlr cable to your audio interface, then connect the other end to the microphone. and this is really the final step, in terms of setting up the microphone on your computer anyway.

after this step you can set up all your mounts, windscreens, pop filters etc, and another thing you may have to do is go into your computer’s system preferences and make sure it accepts the microphone . as your input. 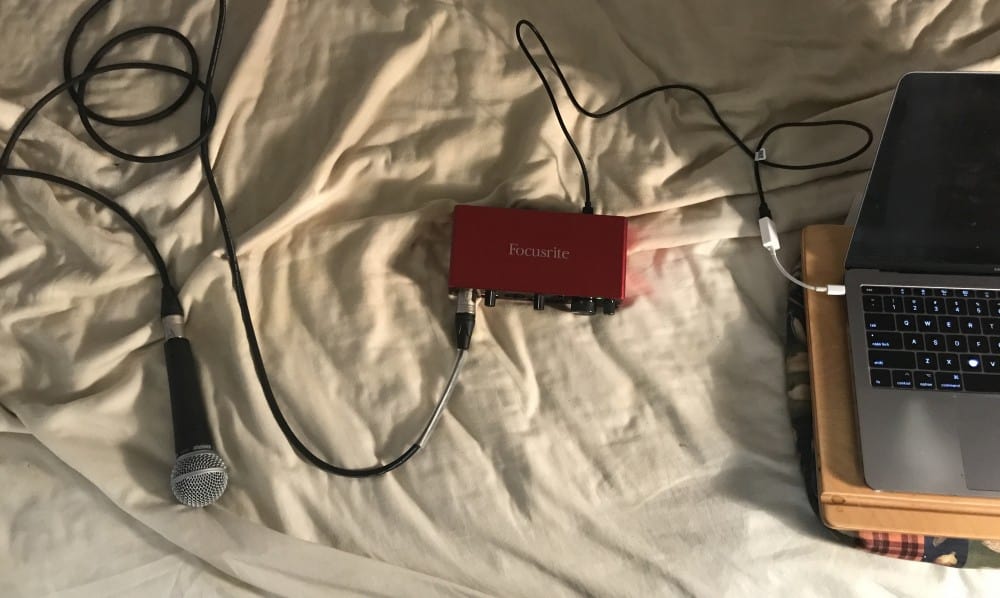 set up your mic stand/boom boom with your mic on it. I used to use a mic stand, but got tired of it because it was always in the way. these days i use a boom arm with the samson q2u like the one you can see in the image below, mainly because it’s the fastest way to connect a microphone to a computer to make youtube videos. It’s also less cumbersome because I don’t have this annoying stand sitting on my desk and taking up a lot of space. 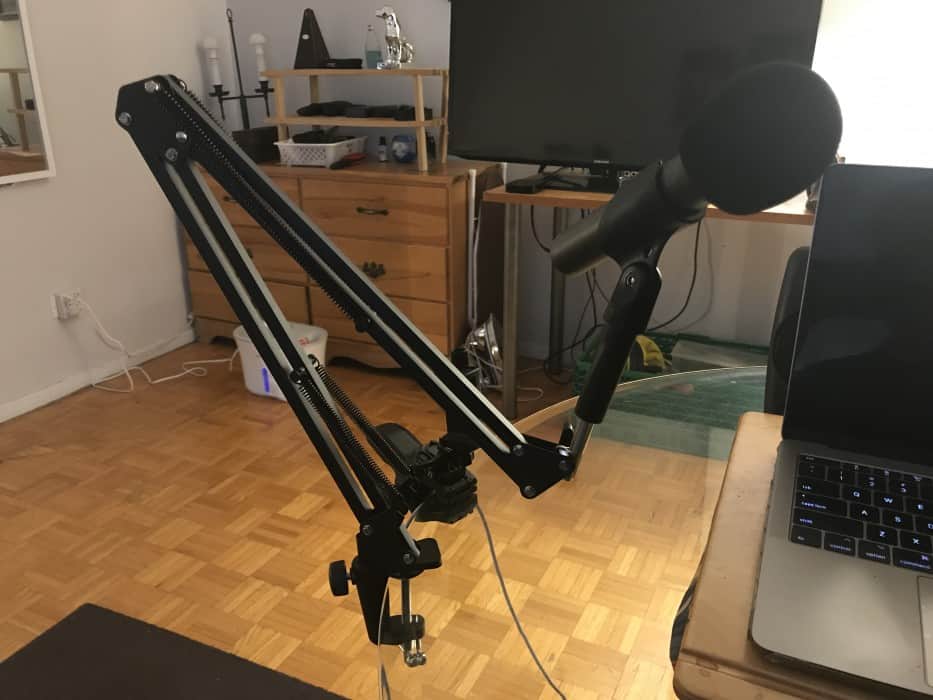 And frankly, that’s pretty much it for connecting your microphone to your computer. Assuming you’re using some kind of software to record the vocals or whatever it is that you’re doing, you’ll just have to go into the Settings, or the System Preferences, whatever the file path is called.

1) if you are using a macbook pro, go to your system preferences and then select the “sound” option. 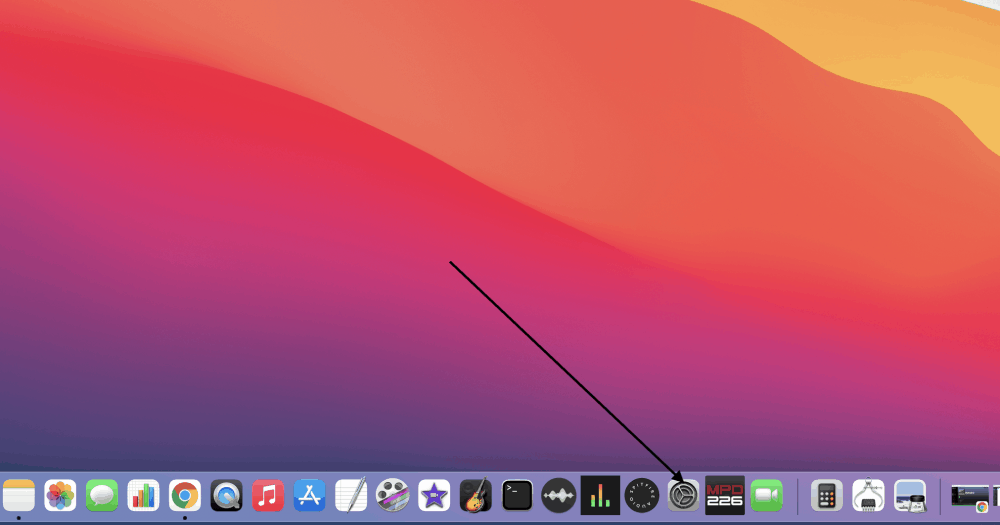 2) Choose the Scarlett 2i2 USB for your input 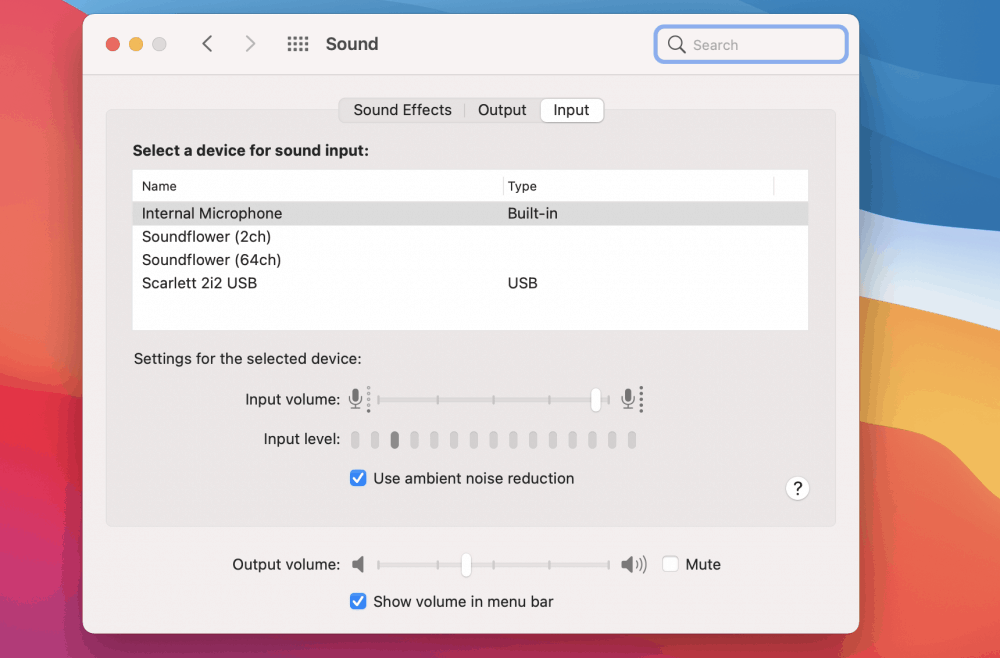 3) And then your computer will begin using the signal from the microphone as an input, rather than the internal microphone that your computer comes with. If you’re using a microphone for a Zoom call (or Skyping with your mom), you’re going to immediately notice the difference between the pre-installed mic and an external one. It’s like a different world in terms of quality.

alternatives to the audio interface/microphone combo

As I mentioned earlier, I used a usb mic mainly because I make a lot of youtube videos. the only difference between this setup and a regular dynamic microphone is that there is no need for an audio interface in this case.

If you don’t like the idea of ​​using an audio interface to connect to your computer, or if you just don’t need high quality audio because you’re just looking for a simple microphone for zoom calls with your boss, then I’d recommend getting the samson microphone. q2u (also on amazon). this is incredibly simple to set up, as you can see in the image here. 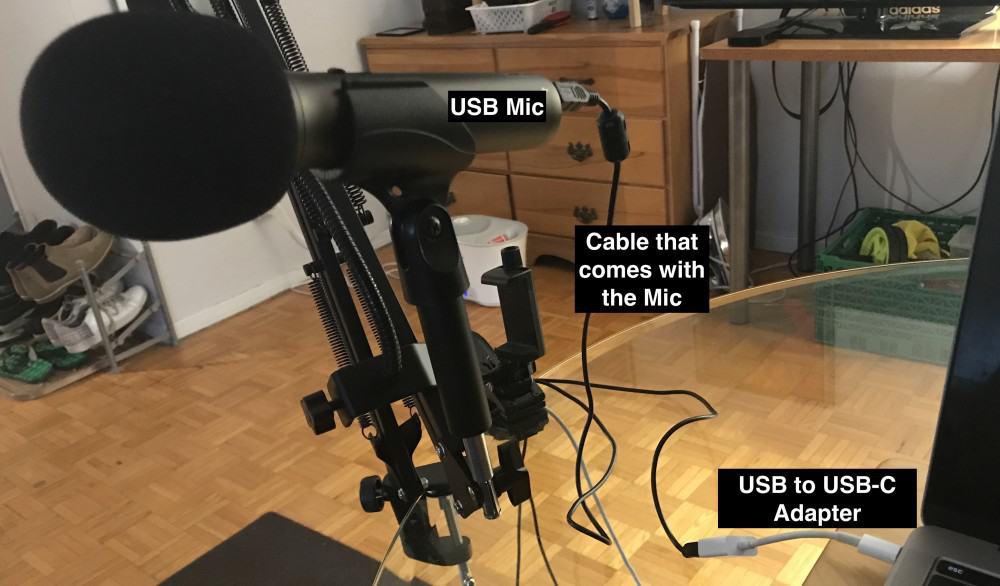 This is undoubtedly the easiest way to set up a microphone with your computer, and probably the cheapest, as well. All you really need is the USB to USB-C adapter, assuming you don’t already own one. All of the other necessary gear comes in the box plus a few other accessories that I’ve written about before.

Important things to consider about connecting microphones to computers

This article explored how to connect a usb microphone and a dynamic microphone specifically, however if you wanted to use a condenser microphone the process would be slightly different (but not by much). I’d still use an audio interface like the scarlett 2i2, but for a condenser mic, for example, I’d just have to turn on phantom power.

team mentioned in the article

I’ve mentioned quite a few products in this article, so I think it’s worth listing them all here. The first four products are the necessary equipment that I mentioned as part of this tutorial, but the last microphone, the Samson Q2U, is more for people who don’t want to bother with connecting an audio interface.

How to use Minecraft Forge | PC Gamer

Quick setup and troubleshooting guide for the UPPOON WiFi extender How to Convert SFP to Ethernet?